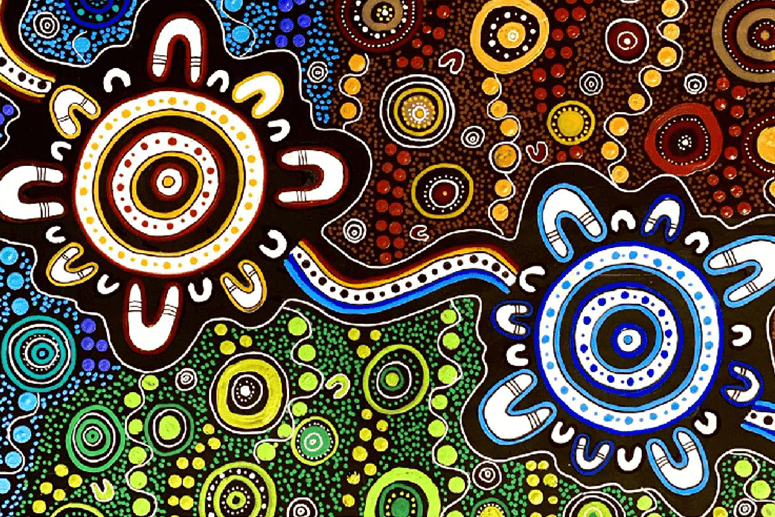 Ngara Djurali Grow Mirrung- Listen. Grow. Belong
We are thrilled to present our officially owned Aboriginal Artwork “Listen.Grow.Belong”, created by the Aboriginal artists Trevor Eastwood and Jason Douglas of Dalmarri.
It was an absolute pleasure working with the Dalmarri team in getting this artwork to represent Southern Cross Group. Thank you for doing such an amazing job.

Here is the artists’ interpretation of this masterpiece:
“The painting depicts Southern Cross Group’s and Southern Cross Pacific’s journey on reconciliation.
The two large concentric circles in the middle are the two companies, the blues being Southern Cross Group and the red, yellow, black, and white is Southern Cross Pacific.
The line joining the companies shows their continuing growth throughout their genuine respect for reconciliation.
Around the circles are the U shapes, which represent company leaders and employees all coming from very different backgrounds enriching both companies with their diversity and values.
The four large U’s is the core business areas such as Security, Traffic Control, Cleaning and Security Consulting.
The values of respect, loyalty, honesty, integrity, and courage are shown with the dots never-ending inside the circles.
The surrounding areas are the diverse community that Southern Cross Group engages within coastal, rainforest, bush, and desert regions.
The many shapes and circles are a representation of the various business enterprises that they have built relations with and their respect for the first nations people.”- Dalmarri Group