Build for a Cure, a program run by the Children’s Cancer Institute, aims to raise funds for researching cancer and caring for children with cancer. By auctioning a home, built entirely through donations and volunteer work over a strict 21-day period, the Institute hopes to raise up to $800,000 in its October efforts to help children beat cancer.

Southern Cross Group is proud to support the Build for a Cure campaign that will not only bring us a step closer to finding a cure, but also help to remove the stigma of the diagnosis and what it means when families are told their children have cancer. As a supporting partner of the Institute, we hope that our generous donations and support will assist in raising funds and awareness of childhood cancer and the terrible impact it has on families.

For more information on the Children’s Cancer Institute’s Build for a Cure program, as well as a live-time lapse of the construction.

Footage from the October house’s flying start can be found here. Congratulations on your position as Regional Finalist Sam! Next year you’ll make it all the way! Source – http://www.ey.com/au/en/newsroom/news-releases/news-nsw-and-act-ey-entrepreneur-of-the-year-tm-finalists-revealed

Southern Cross Group are proud to announce we have been selected to perform security services for The Newcastle Jockey Club at their Broadmeadow and Cessnock Raceways. Selected due to our events experience and diligence in customer service training, Southern Cross relishes the challenge of adding to our events portfolio at these prestigious sites. Located in the heart of Newcastle on the picturesque Hunter Coast, the club has a proud tradition stretching back over 100 years and their Broadmeadows Racecourse is the largest provincial thoroughbred racing club in New South Wales. Raceday is always a hive of activity and excitement and Southern Cross are at the very centre of events, ensuring a seamless day out for this, the Sport of Kings.

In the cleaning industry, we are often told that ‘Green’ alternatives are superior to their harmful, chemical counterparts. But why is this the case? Why is green cleaning so much better than traditional products? The following list of benefits from care.com highlights why green cleaning products are undoubtedly the way of the future:

Some of the chemicals we use to clean client sites contain dangerous and harmful chemicals, some of which require us to wear protective equipment like gloves or goggles. Part of this risk is also passed on to clients and their customers who interact with these sites. Studies show that cleaning products which linger in the air and remain on surfaces can raise the risk of asthma development. Since green cleaning products don’t use these harsh chemicals, the risk is entirely removed.

When cleaning sites, it’s easy to overlook the impact we are having on the environment. Many chemicals used in cleaning can damage aquatic ecosystems and harm the animals living in these areas. Many green cleaning products are biodegradable and can be more safely disposed in waterways, minimising the impact on the environment. Additionally, most green products utilise recyclable packaging, which can also result in cleaner environments.

Remember the protective equipment mentioned earlier? While many conventional cleaning products contain ingredients which can burn and irritate the skin and eyes, green products are often non-corrosive and meet strict standards regarding inhalation, toxicity, combustibility and skin absorption.

Many people can’t stand the smell of strong chemicals, and in some cases this could result in reduced business for our clients. On the other hand, green products are often made with natural oils and fragrances to produce pleasant odours.

From these few points, it’s easy to see that green cleaning is the way to go. Green initiatives have already begun at many of our cleaning sites to protect our staff, clients and everybody who interacts with these places.

Last night our CEO, Sam Johnson took part in the annual CEO Sleepout to raise funds and awareness of homelessness in Australia. Well done Sam, a fantastic effort for a great cause! During a recent incident at Westfield Parramatta involving a travelator, Southern Cross Group’s Security Officers reacted swiftly to take crowd controlling measures and ensure the safety of shoppers. During this high-pressure incident, our Officers acted professionally and efficiently, diffusing the situation and contacting the appropriate emergency services. In light of their efforts and outstanding team work, we are very proud to award the following team members: 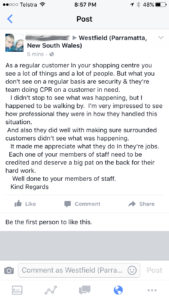 To celebrate Mother’s Day and show our appreciation for all the incredible women in our lives, Southern Cross group teamed up with Vicinity Centres to conduct a special Mother’s Day initiative at Collonades Shopping Centre in South Australia. From May 7th to 9th, once every hour, Southern Cross security officers randomly selected a lucky mother to receive a small gift of a bouquet of flowers, a box of chocolates and a card to show our thanks for all the hard work they do. All of the chosen mothers were pleasantly surprised by the gesture, one mother reportedly expressing her gratitude by saying “Wow! It looks like I’m getting something for Mother’s Day after all!”.